PETE ROSS is a banjo maker, researcher, and musician who lives in Baltimore, Maryland. Mr. Ross is one of earliest contemporary makers of gourd banjos, ranging from those of his own design to exact replicas of historic instruments. His reconstructions of eighteenth- and early nineteenth-century banjos have been featured internationally in museums, art galleries, movies, documentaries, and live performances. 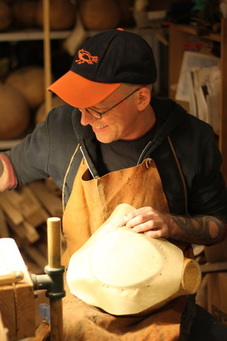 Mr. Ross holds a Bachelor’s of Fine Arts from the School of Visual Arts (SVA) in New York City, where his senior thesis focused on reconstructions of the New World banjo, and on the banjo’s place in the broader American culture. Shortly after graduating from SVA in 1994, a large part of this thesis work was exhibited at CBs Gallery, The Bowery.

In 1994, Scott Didlake, a master early-banjo builder living in Jackson, Mississippi, offered Mr. Ross an apprenticeship to study with him. After Scott's death, Mr. Ross returned to his home state of Maryland, where he has continued the research needed to authentically recreate the banjo in its earliest New World form.

In 2014, Mr. Ross co-curated “Making Music: The Banjo in Baltimore and Beyond” with Greg Adams and Robert Winans. The exhibit at the Baltimore Museum of Industry explored the mid- to -late nineteenth century Baltimore banjo maker William E. Boucher, Jr. and the transformation of the banjo to a commercial product. He has an essay about the Haiti Banza discovery and early banjos in Banjo Roots and Branches (University of Illinois, 2018). Ross has lectured on banjo history and taught banjo construction and performance at the Baltimore Civil War Museum; Augusta Heritage Workshops; The National Folk Festival; The Black Banjo Gathering; and elsewhere.